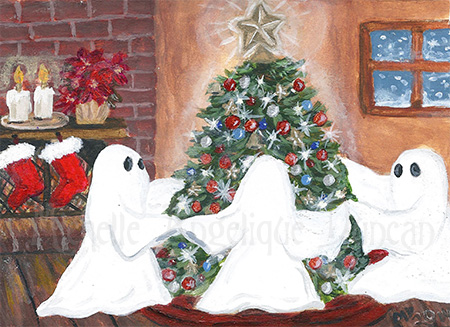 The Spirit of the Holiday
-By Angelique Duncan

As the holidays approach many experience that familiar feeling that is the warming of the heart and optimism for humanity, the desire for peace and goodwill towards others. That feeling is known as the holiday spirit. In Christian ideology it is thought to be the spirit of Christ that one is feeling. Others believe it to be Yuletide Spirit. Perhaps it is just the nostalgia brought on by the sights, sounds and flavors of the season that bring to light memories of simpler, happier times. Some suggest that it is inspiration roused by the hopeful song lyrics and sentiments of the season that makes us softer of heart. Or maybe, what we experience with the holiday spirit is actually the presence of spirits, holiday ghost.

In many cultures the winter holiday season is a time of reflection on the dead. In Finland as well as in some South American countries visiting the cemetery and placing a candle on the graves of the departed on Christmas Eve is an honored activity practiced every year. The Irish practice the tradition of laying a wreath or other decoration on the graves of loved ones in remembrance of their lives and to share the holiday with them. In Macedonia after the holiday feast the table is left un-cleared until the following day so that spirits in the house may have their own holiday feast. In Greece it is believed that the spirits descended from of Pan and Satyrs, and Faeries visit during the 12 days of Christ. Some in Greece say that these spirits are demons up to no good, other believe they are the spirits of the old Gods making their presence known keeping pre Christian beliefs alive despite their antiquity. Many European cultures hold that Christmas elves are actually spirits of the dead visiting the home.

In some Celtic beliefs the window of time between December 22nd ghosts of the departed come to visit and leave after the 26th of December. Another ancient Celtic tradition holds that the faerie spirits come at Winter Solstice to over see the passage of the old Sun to the new Sun and the change of the season. It is thought that the spirits come to help aid humans to be better people and be stronger in their humanity. In the belief it is said that the faerie or nature spirits travel in pairs to a home, one will occupy the hearth and fire and the other the kitchen. The spirits who occupy the hearth are there to bestow a blessing of good fortune and warmth and the spirits in the kitchen are present to bestow blessing on the food for good health and prosperity. They are there to build optimism for the coming seasons of the year.

Some say that nature spirits, faeries or animal spirits come in to the home with a live tree seeking warmth. Other legends say that holiday spirits will slip through cracks in windows or doorways. Sometimes the spirits will announce their visitation with a tap on a window or door and once opened they perceive it as an act of welcome and will come in. Superstition has it that these holiday spirits are attracted to the warmth and glow of fires, candle flames and lights.

Many believe that ghost are spirits of the departed who have unfinished business or something left undone. These spirits refuse to, or have not been allowed, to pass on to the spirit world until they are done with the task. In Christian beliefs they are not allowed into heaven because their souls were not saved or they had sinned on earth and were not deemed worthy of entry.

It is thought that some ghosts are drawn to the comfort and warmth of good people and a happy home during the holidays and will seek such a house to fulfill the memories they longed for in their earthly life. Or they may be a relative visiting to ensure those they left behind are following the right path of character and action in their lives.

There are many legends of ghost who are sent to remind humans to practice charity and goodwill. These spirits are here to seek out those who need to be tested to reinforce their humanity. In the folklore the spirits take on a human form and offer a test to the individual to give them the opportunity to redeem themselves. This notion originates from old Celtic belief that one must turn over a new leaf before the coming of the new Sun of Spring and beginning of the New Year.

In these stories the ghosts appear as a wandering stranger in need of shelter or food. The human is offered the choice to help the stranger with some form of charity. There have been many myths and legends that have appeared with this theme through out the decades and in many cultures. In modern times it may be a person whose car has broken down on the road, or is need of a phone to call home. The spirit could also come in the form of something as simple as a person carrying packages in need of a door held open, or perhaps a Salvation Army bell ringer. One never knows when or what may be the test or “who” may be the ghost.

Some need bigger tests to get them on the right path of humanity. In these cases it is believed that Draugr will appear during the holidays. Like the friendly spirits who check on loved ones and spread good will, Draugr also have unfinished business and a holiday mission.

The Draugr mythology comes from Norse, Icelandic and German folklore in it’s origin, however similar concepts appear in many cultures. They are not ghosts of the dead in spirit form, but a physical zombie like corpse. Not alive but not completely “dead”. They are said to have intelligence but are driven by revenge or malice for unfinished business or entitlement while on alive. They are the result of a life spent of greed, selfishness and mean. Some still walk the earth trying to obtain what ever it was they could not get in life and selfishly refuse to stop questing. While others are not allowed by the Gods (or God) to completely “die” as punishment due to their life spent wasted.

The Draugr who were not allowed to pass on to death, who regret their discrepancies, will seek out those they knew while living to serve a warning of what will happen if one does not live a live of kindness and charity. In Charles Dickens Christmas Carol the ghost of Marley was a Draugr sent to warn Scrooge. The three ghosts who subsequently visited Scrooge were the other kind of aforementioned friendlier holiday spirits. Unlike benevolent spirits who may take an ethereal or human form the Draugr live in a state of decay and become more ugly and vile the longer they are dead just as a corpse decays under ground. They serve as a reminder that the uglier ones spirit, the more heinous ones physical self will become in life and in death.

With the coming of winter and the holiday season, find your holiday spirit. Find your humanity and sense of charity. Hold the door open for someone passing through, donate some clothes or food to a shelter, look into the eyes and give a smile when you pass a stranger. Be that person that you always hoped you could be, that better self who acts in kindness not in greed. Whether the inspiration comes from an old favorite holiday song, a childhood memory held in an ornament or a ghost who came in to sit by the fire and enjoy your decorated tree, find the goodness of your heart and spread the holiday spirit.

Come to the Dark Side. We Have Yule. -By Debbi Decker

Although the holiday season of Yule is generally associated with birth and light, the original festival as celebrated has a much darker side. Celebrated by Germanic peoples (the most familiar will be Norse and Anglo Saxon) in pre-Christian times, Yule not only encompassed feasting, reveling, and celebrations, it also featured death, sacrifice, and ghosts.

Yule was primarily a midwinter observance during the months of December and January, which, over time, was incorporated into the Christian celebration of Christmas. Some familiar practices that have come down from this observance include the Christmas ham (the Yule boar) and caroling. Some of the not so familiar Yule customs and beliefs are as follows.

With December 21st comes the shortest day of the year and along with that comes the Wild Hunt. It is believed that the Wild Hunt comprises demons or dead fairies, ghosts of former huntsman or the undead, called Drauger (possible zombie references here), raging across the sky in search of dark secrets and souls. It was considered most unlucky to see the Wild Hunt, and many lit fires or candles to keep the Wild Hunt at bay as the light would repel the dark and the spirits that reside there.

Christmas Eve as we know it was originally celebrated in January and was known as Mōdraniht, which is old English for Mothers-Night. This celebration references “dis” or spirits of fates. Sacrifices were made on this night and many practices centered around fertility rituals to ensure a bountiful new year to come as well as to celebrate the fertility of tribes.

Aspects of modern day Christmas festivities can be traced back to the reverence of the Norse god Odin. The ham we eat is a reference to the boar with an apple in its mouth. The Yule log is burned to revere the departed souls and also to keep the darker side with its ghosts and demons and ghouls at bay. And again, another aspect of the Yule log may be phallic in nature as the ashes were sprinkled in the fields to bring fertility to the coming harvest.

So, this Yule season, light your candles and Yule logs and keep the darkness and all it encompasses away. Pay tribute to your ancestors, and most importantly, if you hear a huntsman’s horn on Christmas night, remember to stay inside. If not, you might be carried off to the darker side of Yule.