“For my part, I prefer my heart to be broken. It is so lovely, dawn-kaleidoscopic within the crack.”

“Dancing?” Wilbur asked with a strange mix of bitterness and piteousness on his Owly face (well, odd “Owly,” to be sure. Wilbur is technically an Owl, but he’s sort of an Owly Raven. It would be a great deal to explain right now and we really don’t have the time, Dear Reader, as this is a Valentine tale and not a Weird-Science-Gone-Pleasantly-Wrong Tale).

“Yes, Wilbur. There most certainly will be dancing,” Fiddler-the-Cat spoke calmly and continued to steer his friend to the closet. Fine feathers he might have, but these fine feathers had a decidedly gloomy tinge to them this afternoon. He had to find him a scarf or hat or something to brighten the ensemble Wilbur continued to allow himself to be guided to the armoire, which Fiddler opened with his usual flourish. A flourish that Wilbur did not possess. And did not care to be in possession of, to be exact. Let the Cat have the flourish, Wilbur thought. He had his own talents. Still, though he loved his beautiful, talent-for-the-dramatic-and-Magick friend, it did not stop him from accusing.

“You didn’t say anything about dancing when I agreed to attend.”

“Really?” Fiddler asked while pulling out and rejecting scarves, hats, and silk ties from Wilbur’s closet and tossing them onto the large, pillowy bed, “I sort of thought that was implied when I told you we were invited to the Valentine Dance.”

“Yes, yes. But I thought the “Dance” part was really more of an expression. You know like when we say we’re going to have a Sunday Breakfast, but we really don’t get up until noon.”
Fiddler, back turned to his friend, felt free to roll his striking, emerald cat eyes heavenward,

“Come on, Wilbur, help me out here. What do you have to wear to the party?”

“Party? Now we’re calling it a “party”? You know how I feel about parties.”

“Yes, yes, but we don’t have time for a trip down Old Trauma Lane right now. What do you want to wear to the dance?”
Wilbur shuddered at the word “dance” and simply grabbed the first thing he saw: a rumpled, scruffy Witch’s hat.

“This?” Fiddler asked trying his best not to sound horrified.

“I know and I don’t care,” Wilbur said and stubbornly stuffed the it-had-seen-better-days hat onto his black-feathered head.
Fiddler eyed him doubtfully,

“And you’re certain of your choice?”

“Yes.” His mind was made up. “Look,” he pointed to the brim, “it even has a heart sewn on it.”
The small, dusty pink heart sewn onto the deeply purple sash wasn’t the best example of a heart. It was a bit skewed. Crinkled, wrinkled, and quite frankly frinkled (another word for skewed) the poor little heart had seen better days…or at least Fiddler hoped it had seen better days.

“Fine,” and threw up his paws. Perhaps if his friend wore the Witch’s hat, he’d relax and stop complaining.

The truth was that Fiddler was nearly as nervous for himself as he was for his good pal Wilbur. Neither of them was entirely comfortable with the entire Valentine concept. Granted, they both belonged to the Great Holiday Maker Tribe and as such were committed to making the very best out each and every holiday, even the ones that seemed a bit odd to them. Not to mention (although we are) the fact that both Wilbur and Fiddler had experienced that most poignant of conditions: the Broken Valentine Heart.

Although it is hard to believe that anyone could break the heart of either of these boys (well, cat-boy and owl-boy and truth be told neither were “boys” being that they were each well over a hundred years old, but young by Great Holiday Maker Tribe standards). Both of them are terribly handsome, amazingly talented, and gainfully employed, but sadly broken hearts are part of life, are they not?

Halloweenish as the two were (all midnight feathers and fur and Wilbur wearing a Witch’s hat and Fiddler being his usual, sleek, black cat self), they made their way through the snow covered forest to the Grand Ole Oak Clubhouse. Each in their own manner: Fiddler strolled and hummed while Wilbur trudged and grumbled,

“Fine for you, Fiddler, you’ll have something to occupy yourself with.”

“You’ll not get any sympathy from me. You could always accompany my fiddle with your singing.”

It was a sore point between them. Wilbur used to sing and sing beautifully. He stopped after his heart was broken. According to him, Owly-Raven vocal chords are attached to their hearts and once the heart breaks, the vocal chords break, too. Fiddler was patient, especially for a cat and most especially with his friends, but
this had gone on long enough. His friend had a gift for singing, just like he had a gift for playing the fiddle.
One should not trifle with a gift. 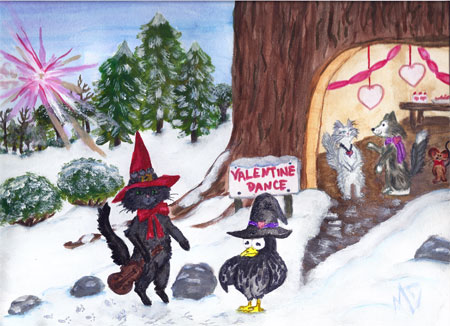 And that’s when Cupid showed up. Not always welcome, but he certainly knew how to make an entrance. Lights flashed onto the pristine snow: pink and red and gold. It was a bit like a disco really, but who would
complain to Cupid? Certainly not Fiddler or Wilbur.

“Look, I really don’t have a lot of time, lads. This is my busiest time of the year, you know.”
Blinded by the sparkly, fuchsia beams that shot out of Cupid’s golden locks, both Fiddler and Wilbur merely nodded, although they couldn’t help but wonder what had brought the love-arrowed-candy-and-flower-
bearing-everyone-thinks-he’s-an-angel-but-he’s-really-a-demon dude to their part of the Woods.

“Your collective suffering has touched my heart. In a most unexpected way, I might add. So, I’ve decided to bless you both with an arrow.”
Unbidden, both lads gulped and took a step back. An “arrow” from Cupid? No, thank you, Sir. No, thank you, indeed.
Cupid let out a great sigh,

“Not that kind of arrow. This is an Arrow of Truth.”
Wilbur whispered to Fiddler,

“Sounds like it will hurt just as much as the other kind, if you ask me.”

“And I didn’t ask you, did I?” Cupid hovered above the two now and the arrows on his back glowed a foreboding crimson.
Fiddler who was not in the mood for a tussle with Cupid on Valentine’s Day decided to be the peacemaker and held up his paws,

“Come on fellows, we all have a busy schedule tonight.” He turned to his friend, “We should hear Cupid out, we’ve known him for a great many years and he doesn’t mean us harm, you know.”

“Of course he doesn’t mean us harm, we just end up harmed.”
Now Cupid’s skin began to glow as crimson as his arrows. Steam churned out of his golden earring adorned ears. And his arrows? Well, sparks seemed to be spitting out from the quills. None of this boded well.

“If you end up ‘harmed’ it is your own fault, Wilbur. No one told you to be so grumpy.”
Stung, Wilbur shouted,

“I am NOT grumpy!”
He glanced over at Fiddler, who gave him a “look.” You know the kind of “look” that only good pals can give us, because they’ve got our number.
He then had the grace to amend,

“Or at least I’m not all the time. Only about Valentine’s. It’s just not my thing, Cupid.”
Instantly, Cupid softened. Demon he may be, but his heart was that of a Lover.

“I know, dear Wilbur. And you as well, dearest Fiddler. You have both had a rough year, to be sure.
But here is my Arrow of Truth,” Instantly an arrow appeared in his hand, he threaded his bow, and aimed, “Your Hearts have been broken, this is quite true. Remember this though, inside your old, tired, broken Heart, a new, eager, and whole Heart grows. You’ll both feel it stretch out of you, quite soon. I promise.”
And with that he was gone, without a fare-thee-well or even a “later, dudes.”

Fiddler and Wilbur looked at each other. Fiddler spoke first,

“Huh. Cupid can be appallingly rude.”

“Yeah, nothing like shooting arrows and then just vanishing.”
They didn’t say, but they both actually felt a lightening of spirit. Like a tight band that had tightened around their chests had suddenly sprung and was no more. Deep breaths could be breathed once again. And that is a very good thing, is it not?

They went to the Valentine Dance, as planned. To the joy of the crowd, Fiddler played his fiddle and Wilbur
did join in with his singing. A grand time was had by all. And as it turns out both lads each met with a fine
lady that very evening: Wilbur met his Betty Bee (a Bee of great humor, spirit, and worth) and Fiddler met Carnival (“Carney” for short, a beauteous silver cat and possessor of a multitude of gifts).

So…if you find yourself dreading this red-pink-and-otherwise-gawdy-hearts-candy-flowers-and-variously-painful-mushy-doo-dahs Valentine’s Day, not to worry, it will all right itself in the end. Perhaps not this Valentine, but then maybe next. As Cupid says,

“…Your Hearts have been broken, this is quite true. Remember this though, inside your old, tired, broken Heart, a new, eager, and whole Heart grows.”