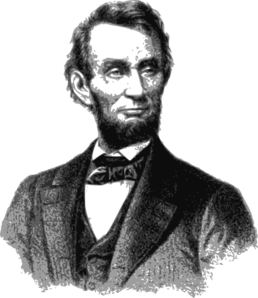 Lincoln, the recent movie by Steven Spielberg, has sparked much renewed interest in me about the 16th President of the United States. I’ve always found Mr. Lincoln to be a bit spooky – his intense and heavy countenance, his wife Mary’s obsession with spiritualism, his assassination, the numerous reports of sightings of his ghost.

Abraham Lincoln has always been described as a depressive person even before becoming President in 1861, very serious and even gloomy. His mother died when he was very young which may have accounted for some of that. Of course the extreme stress he was under because of the country being at Civil War, sparked by the question of slavery and with its massive losses of life, would make anyone gloomy, I suspect. And this is not to mention the death of the Lincoln’s beloved youngest son Willie in 1862. Although Lincoln lived long enough to see the end of the War on April 9, 1865 in his second term as President, his life was cut short by assassin John Wilkes Booth just days later on April 14th.

It is said that Lincoln himself had not only a prophetic dream of his own death shortly before the assassination, but also had a disturbing vision on the eve of his election in 1860 and several times after, that Mary Lincoln interpreted to be prophetic of his death in his second term. He purportedly took some part in the grieving Mary’s attempts to contact their little son Willie after his death through séances, and there are historic records of many spiritualists of the time visiting the White House.

The first widely reported sighting of Lincoln’s ghost in the White House was apparently First Lady Grace Coolidge in the 1920’s, who claimed to have witnessed the figure of Lincoln staring out the windows of the Oval Office. First Lady Eleanor Roosevelt used the Lincoln Bedroom as her study and claimed to have sensed his spirit nearby on numerous occasions. It was also during Franklin Roosevelt’s presidency, another time of war and upheaval for the United States, that visiting Queen Wilhemina of the Netherlands answered a knock at her door only to faint away at the sight of Lincoln’s ghost standing there in his stovepipe hat, and Sir Winston Churchill emerged naked from his bath save for his customary cigar, to witness Lincoln’s ghost standing by the bedroom fire and would never again stay in that room. In more recent times, First Daughter Maureen Reagan and her husband each saw Lincoln’s apparition, and both Nancy Reagan and Hilary Clinton felt his presence in the house.

There have been reports of sightings of a ghost train – the train that bore President Lincoln’s body from Washington DC to Springfield, Illinois – at the train station in Albany, NY during the month of April as well as at other sites along the funeral cortege’s 1700-mile journey. Lincoln’s ghost was said to have been seen near his tomb in Illinois at times. If there is any truth to the idea that disturbing someone’s eternal rest stirs up a haunting, well, it is more likely than not that his ghost was seen, as Lincoln’s body was moved an astounding total of 17 times. Rebuilding of the tomb monument and attempted grave robbing accounted for some of the moves, while it seems paranoia prompted the others. During several of those moves, a hole was cut in the coffin for a secret society of tomb guards to check if Mr. Lincoln was still in there. That old joke about “who is buried in Grant’s Tomb” comes to mind.

But poor Mr. Lincoln…the great man has had no rest, it seems. Perhaps he still seeks to watch over the country he feared would be split apart during his lifetime. Perhaps the burdens he carried were so great as to be impossible to put down and so his spirit still wanders the earth. Or more hopefully, it’s only that his seeming presence still lingers as a residual trace of tumultuous times.