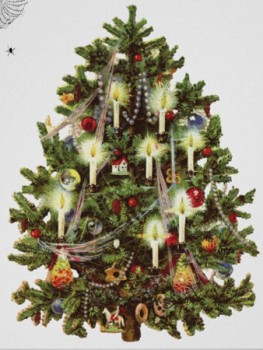 The Legend of the Christmas Spider-By Angelique Duncan

One of our cultures most common holiday customs comes from a very old German and Ukrainian legend of one of the tiniest and misunderstood of creatures. The tradition of covering ones holiday tree in shiny sparkly tinsel originates from the Legend of the Christmas Spider. There are different versions of the legend however the root of the story is mostly the same across cultures.

Once upon a time a gentle mother was busily cleaning the house for the most wonderful day of the year. Not a speck of dust was left. Even the spiders had left their cozy corner in the ceiling and had fled to the attic to avoid the housewife’s busy cleaning.

At last, it was Christmas Eve. The tree was decorated and waiting for the children to see it. The poor spiders were dismayed, for they could not see the tree, or the presents that waited for morning. The oldest and wisest spider suggested that perhaps they could peep through the crack in the door to see this glorious sight. Pretty soon all was quiet, so the spiders quickly crept into the room. The tree towered so high that they couldn’t see the ornaments on top. In fact, the little spiders’ eyes were so small that they could only see one ornament at a time. They all scurried up the trunk, out along each branch, filled with a happy wonder at the glittering beauty. The spiders loved the Christmas tree. All night long, they danced in the branches, and every place they went left a trail of dusty, gray web. When at last they had inspected every bit of the Christmas tree, it was shrouded in the dusty gray of spider webs.

In one version of the story the spiders realized what they had done and were panicked to undo what they had done to the tree and feared once it was discovered they all would be killed. They prayed for mercy as they tried to figure out how to fix what they had done. An angel appeared in answer to their prayer. She offered that one spider would have to be sacrificed to save the rest. The oldest wisest spider offered himself since it had been his instigating that brought the spiders to this dilemma. The angel turned the spider to sparkling ice and transformed the webs into glittery strands of shiny metal. The spiders were in awe that what they had done had made the tree even more beautiful.

This story is told in versions with different entities transforming the webs to silver and gold. Some cultures tell that it was Santa Clause or Father Christmas who upon discovering the web covered tree felt sympathy for the spiders, and for the housewife who had worked so hard on decorating the tree. He touched his hand to the web and transformed it to what we now know as tinsel. The story is also told in a version that arrived much later in history that the baby Jesus helped the spiders and transformed the webs.

Another telling of the Christmas Spider legend from the Czech republic tells that a poor woman who could not afford traditional holiday decorations or gifts yet wanted to provide something beautiful for her children. So she went to the woods and found a tree to put up in their home. She spent the day polishing and cleaning her humble home in hopes of brightening their meager holiday. As she swept her floors a spider narrowly escaped the broom. The women noticed the spider and felt sorry for it. Rather than kill the spider or toss it outside into the winter cold she let it live but asked that she retreat to the attic out of site. In gratitude for the woman’s kindness and mercy, the spider crept down from the attic and labored through the night spinning beautiful webs onto each branch. On Christmas morning the sun shone through the window and hit the webs turning them into silver. The women and her children woke to find the magnificently decorated tree and the exhausted spider on a branch. The story spread and from then on a spider on ones tree was seen as a sign of good fortune.

One rendition of the legend tells that a woodsman went to the woods to cut his tree before a pending snowstorm. A spider had taken shelter in the branches in hopes to avoid the cold and had fallen asleep. When the spider awoke it found it had been moved inside. Seeing the blizzard of snow falling outside the window the spider was overwhelmed with gratitude to the woodsman for bringing him into his warm home. The spider spun decorative webs over the tree in pure joy. When the sun rose the next morning the webs turned to silver glistening on the branches. The woodsman was so pleased with the silver the spider had spun he revered the spider as a token of fortune and each year there after when bring in the annual holiday tree he would collect a spider to shelter the winter in it’s branches.

The Victorians would hang one small ornate spider on their Christmas trees to up hold the tradition and as a reminder of where tinsel came from. This tradition like so many others has fallen to the wayside and has become buried in obscurity of the lost history of the winter holidays. So when your decorating your holiday trees this year, hang a little tinsel in honor of its origin. And when you’re cleaning your home before your holiday company arrives, if you see a spider go scampering past your broom have mercy and spare its fragile little life. It just wants to stay warm and the act of holiday kindness may just bring your home good fortune.