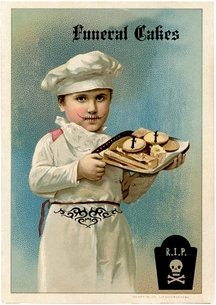 The Sin-Eater?
-By Debbi Decker

A chapel room with walls of stone. It is an open room, with no doors and no glass in the windows. The night breeze flows, causing candles to gutter in the wall niches. Their flames cast odd moving shadows across the room.

In the center of the chapel room lies a body of a man on a raised stone bier. His clothing reflects his position in life, the gleam of gems in the scabbard that holds his sword speaks to his wealth.

There is nothing odd about this setting. Death has come to the village and the village mourns its own. Its inhabitants are no strangers to death. We all die. We all make our last confessions, are shriven, and laid out to rest in various poses according to our position in life. The poorest straight to the grave, the wealthiest given a last moment of glory in a chapel room.

But look closely at this man. There is a meal of roasted fowl and bread, and the last fruits of the season, resting on platters upon his chest. His hands hold a pewter goblet containing the best ale that his household can provide.

A movement at the door draws our eyes to a black cloaked figure, the face hidden deep within a hood. The figure sidles up behind the dead man. Raises his cloaked arms to the heavens. By the cadence and intonation of the mumbled words, we know he is praying. His arms slowly lower. He settles in. To eat. The meal laid upon the dead man’s chest. The fowl and bread disappear into the darkness of his hood. He drinks the ale. And once done, slowly creeps out the door. His face still hidden. You have no idea who he is.

The above scenario is a loosely written memory of a television show I saw as a young woman, and which was my fist introduction to what is known as a “Sin-Eater”. The idea caught my interest enough to research the facts behind story. Would this really have happened? Are there such things as Sin-Eaters? Turns out the answer is yes. There have been and, if the rumors are correct, still are in remote areas of the eastern U.S.

The origin of the practice of the ritual of eating sins remains unclear. It is possibly Germanic in origin, first coming to light in the Middle Ages. The Catholic Church denies such practices existed. And while the story above was a television episode and suspect in the details, there are, however, stories about the practice in England during the 17th and 18th centuries. An individual, for whatever reason, would take on the duties of a Sin-Eater. This person would partake of bread, salt, and wine (or some other beverage) which was left either on the deceased’s grave, or placed near the deceased, or even placed on the deceased’s chest. It was believed that the food would absorb the misdeeds of the dead and by eating that food, the Sin-Eater would absolve the soul of deceased and allow the individual to enter heaven. The Sin-Eater was always reviled and outcast in society. He (or she) would be considered unclean and shunned. In some cases, perhaps the identity of the Sin-Eater was not known. The cloak and hood would hide the identity, similar to the cloaking and masking of the plague doctors so that the public would not know who they were. They could practice their craft safely in anonymity.

It is interesting to note that there are later references in British history to the practice of passing bread and ale over the body of a loved one and given to a funeral attendant to eat. In Bavaria, the custom still exists of placing a corpse cake upon the chest of the deceased which is then eaten by the deceased’s closest relative. The Dutch practice of making dead cakes with the initials of the deceased was carried over to the United States during Colonial times. Each of these practices could be considered to have evolved from the practice of sin-eating.

During the 1800s, funeral biscuits were presented to mourners and bakeries competed against one another for orders of same. Lady Fingers (a type of sponge cake) were wrapped in papers that were printed with texts, poetry, and musings upon life and death. Special bowls, called “Mazer Bowls” were commissioned by the wealthy to hold the wine or ale that was given to mourners during the wake. The growth of the funeral industry stemmed these practices, and over time they have all but disappeared. Perhaps replaced in our present era by the family gatherings after the funeral. Almost all of these gatherings offer a meal or some kind of finger food to be served to the families and their guests.

Though few and far between, I have partaken at these latter day funeral “feasts”. It is not a custom that sits well with me. Sometimes knowledge can be an unsettling thing. Especially in my case. Because each time I allow myself a bite of the food presented I am, in the back of my mind, wondering just what sins or misdeeds I am taking on. And that is never a comforting thought.