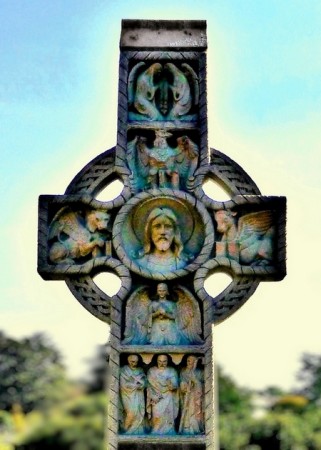 Lately, I have been continuing my research on one of my favorite subjects, iconography in cemeteries. And with St. Patrick’s Day fast approaching, I thought to look into Irish/Celtic symbolism and icons that you might run across in many of the older cemeteries. Two of the most popular that I run across in my wanderings are the lyre or harp, and Celtic crosses. Others not so often found are ones such as stags, shamrocks, trefoils, the Claddagh and Celtic knots.

The Lyre or Harp. A strong symbol of Ireland, often called the national symbol, finding one carved upon a tombstone or on a crypt could mean that the person buried there was of Irish heritage. It is a magical symbol, and the traditional meanings associated with it are hopes of attaining heaven, as well as divine music.

Shamrocks. These are common three-leafed plants of the clover family and they are not to be confused with their four-leafed counterparts. Shamrocks represent the idea of three, a sacred number in Celtic lore, or the holy trinity in the Christian faith, i.e., the father, son, and Holy Ghost. It is also a popular motif on tombstones found in Australia. The Druids revered the plant and it was incorporated by the Christians as a symbol used in St. Patrick’s Day celebrations since, as the legend goes, St. Patrick used the shamrock to explain the ideas behind the holy trinity.

Stags. A stag is an adult male deer and is usually depicted with an impressive rack of antlers. The Celts believed that stags could lead souls out of darkness, and also thought that the antlers represented the tree of life and of regeneration. When depicted with a cross between its antlers, it becomes a more Christian motif that means purity and renunciation of Satan.

The Claddagh. Usually depicted as two hands holding a heart, it is a symbol of undying love and friendship. Often used for engagement and wedding rings, it can also be seen carved onto a loved one’s memorial stone or combined with the Celtic cross in the cemeteries.

Trefoils. I do not often run across trefoils, but when I do they are in a triangular form, with three spirals carved inside the triangle shape. Again, they mimic the shamrock symbols and have somewhat of the same meanings, such as representing the holy trinity with the addition of the meaning of wisdom.

Celtic Cross. This is an extremely popular monument found in cemeteries across the world. The cross, originally of pagan origin, has been married to a circle. Legend tells us that St. Patrick took the Christian cross and placed the circle upon it to represent the sun in order to convert the sun-worshipping pagans. The idea was presented as the Christian god being stronger than their sun god. These crosses can range from a simple cross and circle to elaborately carved memorials, incorporating other images, most notably Celtic knots or images of Christian saints. The most beautiful Celtic cross I have come across to-date is located in the Hollywood Cemetery in Richmond, Virginia. This particular cross is covered in biblical images.

Cemetery symbolism and iconography is a wonderful and enlightening subject. Try looking for unusual motifs the next time you wander through one, and then learn about what they mean. These symbols speak to the history of the person buried as well as to possible religious beliefs and family heritage. Although we can never be absolutely sure what a particular icon or symbol truly means (since we have no idea what was in the minds of the survivors who erected these stones and monuments), we can still appreciate the general meanings behind them and the beauty represented in their artistic representation. 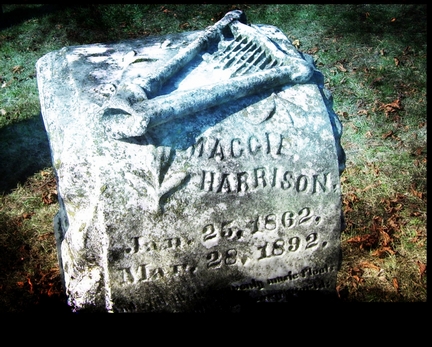 Photographs “Lyre” and “Cross of Many Colors” copyrighted and provided by Crazed Poppet Creations.