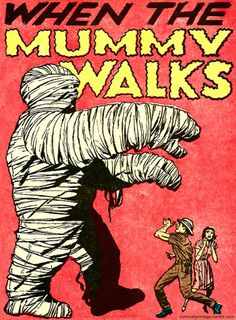 The Curse of the Mummy-By Angelique Duncan

When one thinks of classic Halloween monsters, and costumes the mummy will certainly come to mind; gauze wrappings on decayed skin representing the preservation of the physical body, acting as a vessel holding the deceased until their passage to the afterlife. Petrified and mummified human bodies have been unearthed on nearly every continent. Often associated with Egypt, numerous mummies have been found in Asia, the Americas and even Europe. Mummies have always had a mystique surrounding them and evoke the fear of ancient curses, or the notion that the preserved corpse still holds life that once disturbed will return.

During the Middle Ages mummies were highly sought after for varied and unusual purposes. Many mummies were taken from tombs in Egypt and Africa for the pharmaceutical trade. Until the 16th century it was believed that ingesting powder made from mummies had grand healing powers. People believed that the rituals and rites of the Egyptian burial practices endowed the mummies with immortality that would transfer to the living when ingested. Another popular belief was that powdered mummy would stop bleeding and heal wounds. Some unscrupulous “Medicine Men” would sell the ground up corpses of suicides and criminals that were stolen from graves and sell the remains passing them off as authentic Egyptian mummy powder.

After the medicinal demand for mummies ended and despite early Arabic translations of warnings of curses surrounding disturbed mummies, the powder made from the bodies remained in demand until the early 19th century for paint pigment. The paints that were made from the remains created a brown tint that was called “mummia” or “deaths head”. Many of the great masterpieces that hang in museums today were painted using paints made from mummies. The practice was eventually ended and the color “mummia” was made from ground frankincense mixed with other elements.

Thousands of mummified cats were found throughout Egypt. It was common for these cat corpses to be taken and used for all kinds of purposes, one common use was as fertilizer. Rumors and myths exist that mummies were also used as fuel and the wrappings as paper, however these claims have never been substantiated. During the 19th century the practice of desecrating tombs for profit became frowned upon, as archaeology and the study of civilizations became a prominent science. This however, did not detour wealthy Victorians in England from purchasing mummies illegally for entertainment. The Victorians were fascinated by the romanticism of the occult and magic. Egyptology had become the rave and the stories of ancient curses had made their way into the mainstream. The wealthy would hold parties to observe the unwrapping of the mummies and hold séances with mediums in attempts to awaken the deceased they believed incased in the mummy corpses.

Curses were written or depicted on the walls of tombs in Egypt and were originally interpreted by the Arabs who seldom risked tampering with Egyptian magic. As archeologist studied the Egyptian language and imagery the warnings left in tombs were substantiated. A new study emerged from Egyptology, the history of the curses and their validity through documentation of those associated with the digs and their artifacts suffering from strange illnesses and even unexplained deaths. 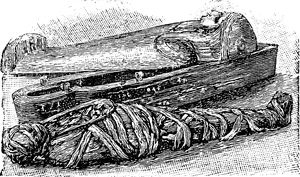 Later the widespread belief in the reality of the curses was perpetuated as several famous instances of them coming to fruition were spread through news media. The most famous curse being the deaths surrounding the disruption of King Tut’s tomb when it was excavated. Six people died who were on location at the tombs opening. It was reported by the New York Times that the lead of the project, Howard Carter’s pet canary was found eaten by a cobra. This was pertinent in that it is the imagery of the crest of the Egyptian monarchy. Later six of the team all died from mysterious causes. Rumors at the time stated that the number of deaths was much greater, up to twenty-six deaths, which helped fuel the hysteria and fear surrounding mummy curses. When objects from King Tut’s tomb, including his coffin where exhibited around the world in the 1970’s, many refused to go see the exhibit for fear of the curse and deaths surrounding the discovery.

Another famous curse was documented when Walter Byran Emery took a small statue of Osiris from a tomb dig site. When Emery returned to his room his assistant found him paralyzed on the right side of his body, he was taken to the hospital and by the next day Emery was dead.

In another case when two mummies were removed from their resting place and transported over seas the ship encountered an unpredicted bad storm that tossed them over board. A year later on the anniversary of the excavation 3 family members of the head archeologist all died from mysterious causes.

A recent incident documenting an ancient curse involves an artifact of a ten-inch statue that has been housed in a glass case in Manchester England. It began gradually turning on its pedestal by itself in June of 2013. After staff realized that piece had been shifting direction significantly in a 180-degree turn without any visible assistance, the museum ordered that the case not be touched, the room closed and a camera set up to observe the piece. The footage proved that the piece was indeed moving. Some believe it was the spirit of the deceased whose tomb it was taken from living through the statue. Experts who were brought in to study the artifact say that the phenomenon was caused by vibrations of heavy foot traffic and vehicles on the road outside pivoting the statue on a bump found on the bottom. Some still do not believe the explanation is that simple and hold that the artifact is haunted and cursed.

Science offers that many of the deaths that have surrounded mummies and their artifacts can be explained. It is believed that those who have fallen ill or died were exposed to toxins commonly found in the caves and tunnels where the tombs were housed. Modern science can now identify the dangers of molds, bacteria’s and toxins that early archeologists were not aware of and claim exposure to these things is what caused the mysterious illness and deaths, not the curses left on walls by ancient relatives protecting their dead.

It may be true that there is a reasonable explanation for why so many who disturbed a mummies grave have died or how an artifact pivots on it’s own. However when one is dealing with the dead and curses from antiquity, it’s always best to err to the side of caution
and leave a resting mummy alone. If one shows up at your door on Halloween night be sure to throw in an extra piece of candy, lest you will suffer the curse of a mummy! 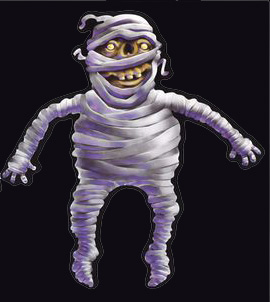