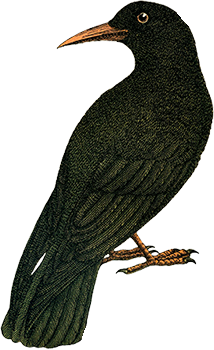 The Crows and The Ravens
-By Angelique Duncan

In mythology crows and ravens have become interchangeable. There are a multitude of legends across the globe surrounding these fine black birds. They are part of a family of birds that are referred to as corvus that has over 40 different species of proud black birds and even colored jays that are referred to commonly as crows. A common theme among crow legends is their high intelligence and use of tools. Depending on the culture they are deemed good or evil, wise sage or trickster or simply nuisance. For many today, they are a symbol of the spooky. This was not always their persona, once they were seen as Gods.

Crows and ravens are found making appearance in creation myths in several cultures around the world. In Native American tribes of North America the Raven brought light to the world. It is said, in varying tales, that in the beginning there was darkness created by a Great Chief who resided in in the heavens. He kept light hidden away in a locked box. Raven, not feeling it was fair to keep light from the rest of creation devised a plan and stole the box. Raven flew away with the box and dropped it to the earth where it split open spreading light creating the sun, moon and stars.

Another Native American creation myth tells that the Raven stole water, light and fire from a greedy grey eagle that despised humanity and kept the elements for himself. The Raven stole the elements and flew around the world carrying light, water and fire in his beak. He hung the moon and sun in the sky creating light. He dropped the water to create lakes and streams. Lastly he released the fire where it fell into rocks. The Raven, once a white bird, feathers had turned black from the smoke of the fire he carried. The Ravens feathers remained blacked as reminder of what he gave humanity.

In another folklore of Native Americans the Raven created the world and took care of humans, giving them vegetation, shelter, clothes and taught them how to take care of themselves. When a great flood occurred the Raven gathered animals by pairs to save them and humanity as well. After the floods reseeded, the Raven fell in love with a human and wanted to marry her. The family however refused to allow their daughter to marry a scavenger bird. As revenge for his broken heart the Raven created mosquitoes to punish all of the humans for their lack of gratitude for what he had done for them.

It is a reoccurring theme that the Crow as a spirit animal is to have great intelligence, creativity and the able to change with ones situation. In many Asian cultures and some South American and European cultures the Crow is a sign of change or birth, literal and metaphoric. The birds are seen as wise messengers and protectors.

However, many cultures have marked the black birds as an omen of death, misfortune and even war. The Crows are known for being scavengers and often will eat leavings of carrion that other animals and birds will not touch. This may attribute to their ill fortune of association with death and foreboding. Observation of their clever demeanor easily explains their prominent place in mythology. However they fell from the perch as creators of the world to more negative connotations.

In Norse mythology two Ravens were the companions of the God Odin. The pair would fly around the world listening and watching and return to give Odin intelligence of what they had seen and heard. Their names were Hugin and Munin, meaning, thought and mind prospectively. From this mythology Crows have gained the reputation as spies and not to be trusted if one is present while a secret is being shared.

In ancient lore, it was deemed bad luck to see Crows before battle. It was thought that they brought defeat and death. The Celtics believed that Goddesses would take the form of a Crow after battle and feast upon the dead.

In Christianity the Crows and Ravens are seen as bad omens and “unclean” and a “flawed creation of God”. In the tale of Noah and his arc, similar to the North American tale of a great flood, the Raven’s role is reversed from savior to selfish slacker. In the Bible tale, the Raven was a grand white bird. Noah sent the Raven to investigate if land had appeared after the rains ended. Instead of returning to let Noah know land was appearing, the Raven stayed on the dry shore and began scavenging and looking for his own food, forsaking Noah and the rest of the animals. Noah sent a dove instead who returned with an olive branch as a sign that all was good. God punished the Raven for his selfishness by turning him black.

Many Europeans believed that Crows were witches or faeries who had taken the shape of the bird to make mischief undetected or to steal shiny objects. The black birds are known for destruction of crops and were seen as sent as a curse by witches to bring financial ruin and misfortune to farmers who had angered a witch. 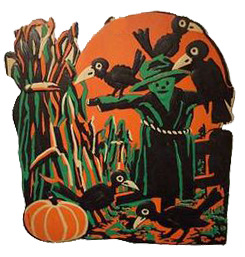 Early Christians believed that the Crow was a sign of evil for it’s black coloring. They believed that to cross one was bad luck. It was told that to see a flock of low flying Crows meant that illness was near. Also, it was believed that a Crow flying over a house and cawing three times meant a death would happen in that home. Another wives tale states that if a Crow caws before the other birds in the morning that dreary weather will come. Some cultures believed that Crows would eat and carry the souls of the dead. It was thought that they were sent by Satan and would only eat the eyes of sinners and therefore carried evil souls to be trapped in the underworld. Properly, the name for a flock of Crows is known as a “murder of crows”, helping to drive home the connotation of death with these birds.

Crows and Ravens have been featured through out fables, literature and popular culture as mysterious birds of intrigue. The Ravens became synonymous with spookiness after the chilling tale of “The Raven” by Edger Allen Poe. The Ravens and Crows secured their place in spooky imagery after being featured in famous motion pictures like “The Birds” by Alfred Hitchcock and the “Omen 2” by Don Taylor.

For many in the United States the presence of the black birds and their familiar caws are a rite of the seasons and a sign that the end of Summer is nearing. Autumn and harvest is close behind. The Crows and Ravens are part of the excitement and imagery that is Fall and for some they are a most welcome and comforting messenger that soon it will be October and Halloween.