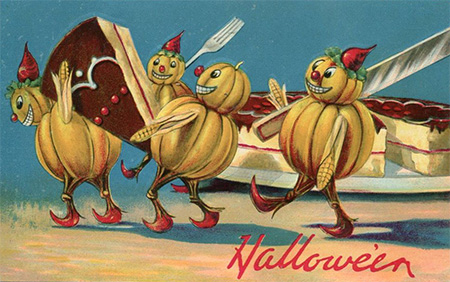 Soul Cakes and the Sugar Skulls
-By Angelique Duncan

October 1st through November 2 marks the holy days once known as Hallowmas. Known as the days when ghost and faeries were most active in our material world. These traveling spirits were hungry. Huge feast were held on the night of Samhain on October 31st to celebrate the bounty of harvest, show gratitude to the spirits and remembrance for the dead who had passed on and the spirits were invited.

In ancient Gaelic tradition of Samhian feast were held to celebrate the finish of the harvest and enjoy the abundance of food before the long days of winter and rationing. Plates of food would be set at the family feasting table for deceased ancestors. Welcoming plates of sweet bread were left at the threshold and near the hearth of the home to invite benevolent spirits in to bless and protect the home before the coming dark season. Cakes would be left as an offering outside the home to appease the mischievous and unwelcomed evil spirits, who it was believed if not satisfied with food and drink would curse the home with misfortune.

Depending on region, tradition and wealth the cakes that were left varied in their recipes. Usually the cakes were made from a simple yeast recipe using spices such as ginger, nutmeg, cinnamon or cloves. They sometimes included fruits and nuts or an icing. The types of sweets offered ranged from small cakes and sweet breads to flat cookies. As the cakes or cookies were baked, mediations were spoken to either welcome the spirits or ward them away depending which offering was being baked.

The practice of going door-to-door “Guising” to collect food for feasting was common. The predecessor to Trick or Treating was born through dressing up in spirit costumes carrying lanterns to trick folks into giving cakes to ward off the “evil spirits knocking on the door”, made leaving cakes and ale out on ones porch more pertinent to avoid destruction of property.

With the rise of Catholicism in Gaelic regions and the spread of Christianity and a push for the Christian calendar, the practice of Samhain feasting in honor for the living and the supernatural was frowned upon. The practice of All Saints Day on November 1st and All Souls Day were introduced. It was now practiced that feasting was no longer to honor the harvest and the spirits who protected it, feasting was to be in honor of the Saints of the church who symbolized the work of the church. The notion to leave offerings to the spirits that could revisit the earth during Samhain was no longer was conducive to Christian thought. It was instead encouraged to leave offerings for salvation. Folks would now go “Souling”, the practice of going door to door to offer prayers or sing hymns in return for what was now known as “Soul Cakes”, cakes baked with prayer to free souls from purgatory.

With the decline of the pre Christian religions the previous mediations were abandoned and the cakes would have a prayer for salvation spoken over them before they were baked. It was believed that the act of eating the cake and saying a prayer would release a soul into heaven and absolve that spirits sins. In more modern practice a cross would be sliced or embossed on the Soul Cakes as a reminder that salvation and protection could only come from the church.
As Europeans expanded Christianity to Mexico and South America the traditions of Hallowmas carried over as well and merged with existing cultural practices celebrating the dead. In Mexico dia de los muertos, the Day of the Dead continues to be a huge cultural celebration that falls on November 1st. The emphasis is on personal connections with the deceased and a celebration of their lives. The practice of feasting and offering sweet breads for the departed are part of annual ritual for Day of the Dead.

Much like the Soul Cakes of Europe, In Mexico and South America pan de muerto literally translated to “Bread of the Dead” is made from anise and citrus and is left out as a welcoming for the departed. The sweet bread loaves are baked with twisted bone patterns, skull shapes or significant totem animals to represent the dead. Well wishes for the departed souls to have safe passage from the grave to the physical realm and prayers are bestowed up the bread as it bakes. The bread is left on a table for the souls to find. It is believed that the spirits will metaphorically eat the essence of the well wishes and prayers “baked” into the bread. The household will leave for public celebration and when the family of the house returns they then eat the bread to share in “breaking bread” with their relatives.

In some regions of South America people will take to the graves of their departed a picnic of the favorite foods and drink of their relative to honor their life and offer nourishment to give them comfort and strength in the afterlife. Families decorate the graves with flowers and confections and have meal with conversation, dancing and remembrance for their lost loved one. The practice also serves as a reminder that death in inevitable and should be embraced rather than feared in hopes that in that the spirit realm will be as happy as the physical one.

Handmade confections of chocolate and sugar skulls are offered to the dead as well as the special baked breads. The name of the deceased is written in icing on the forehead of skull and they are decorated in ornate bright colors to honor them. Sugar skulls are created for the living as a reminder that death will eventually come for them too. Some sugar skulls can be eaten as a treats, however in most traditions they are displayed as a talisman or used in altars to honor life and death. Confections of festive coffins, tombstones and skeletons are distributed as well.

As migrants from Latin America have made their home in the North America they have brought their traditions with them and the modern day the icon of the sugar skull and symbols of Day of the Dead have grown in it’s popularity and meaning becoming part of the repertoire of Halloween decorating and practices. Now many sugar skulls available in the states are mass-produced by machine as a Halloween treat.

Today in the United States Samhain is now celebrated as Halloween. Offerings for the dead, Soul Cakes and pan de muerto once left for spirits; have been replaced by cellophane wrapped candies and marshmallow Rice Krispie treats handed out to live Trick or Treaters. Feasting to celebrate the harvest and remember the dead have shifted from October 31st to the fourth Thursday in November to honor the living family in Thanksgiving. The traditions of honoring and appeasing the dead have all been stripped from our modern Autumn celebrations.

However, that is not to say that perhaps those spirits aren’t still out there wandering during the end of October and into November. Maybe they are. If they are they must be very hungry in that it has been many decades since they have received their ceremonial offerings of food and drink. Maybe this year on the 1st of November, leave a sweet cup cake or slice of bread for a ghost who may be passing by. Or leave an extra plate out at the table when you sit down to your Thanksgiving feast. Who knows, maybe a little ghost will be grateful and thank you on your home in return. 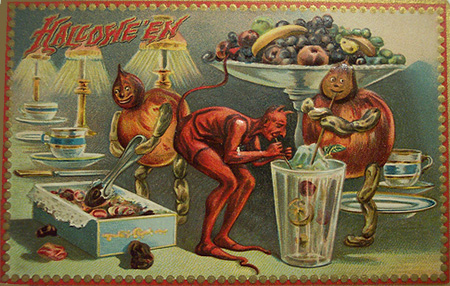