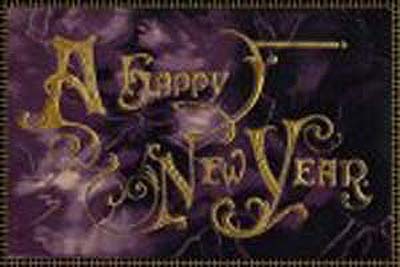 The time honored traditions of ringing in the New Year, the fireworks and banging noises, the Champagne toast and that all-important kiss at midnight, out with the old and in with the new! For most, the turning of the year would not be complete with out these rites. These customs have accompanied the modern celebrations of linear time passage for generations, but why do we do them? Most may not realize how deeply rooted these traditions are in superstition.

The practice of January 1st as the start of the New Year was not truly adopted as the “official” start of the New Year as we know it now until the 1500’s and it was not until the 1700’s that most European countries began the practice. Most of the traditions and customs associated with the holiday originate from ancient history BC when New Years was celebrated in conjunction with the Spring equinox and the lunar calendar.

The hoopla of blowing horns and banging pots and fireworks at midnight did not originate as celebratory fanfare. Today many make a big noise at the stroke of midnight to celebrate that the old year is over and the New has begun as a mark of time passage. It was once widely believed by many cultures that at midnight evil spirits would prevail and seep into the coming year if not warded away. Some cultures believe that the “devils” of the past year will carry over and bring misfortune from the previous year into the new if not driven away.

The drinking of alcohol usually sparkling at midnight comes from the traditions of the Greeks and Romans to share wine at auspicious or religious occasions. Although in modern times most see New Years as just another occasion to drink until drunk and “party into the New Year” the traditional drink and toast at midnight has a more enduring and meaningful background. Many cultures had the tradition of breaking bread and sharing communal drink as a way of building solidarity as a pact of family and togetherness of experience. The traditions of speaking words of the midnight toast were to reflect on the passing of the events of the past era and set the tone for the era to come. The communal toast was to celebrate the optimism and hope for what was to come in the next cycle of time. To share the passage with family, friends and community was to symbolize that one would have those who are dear to them near in the next year.

Many take time at the start of the year to “clean house” figuratively and literally. It was once believed that by cleaning the house before the New Year began was to literally clean away the dark spirits, negativity and any unwanted circumstances from the past year. To start the New Year organized and with ones affairs in order was to make way for positive occurrences.

Our traditions are symbolic of bringing good luck and fortune into the New Year.
So when one makes toast, whoops and hollers, eats black-eyed peas or kisses a pretty girl at midnight, know that you are carrying on time-honored traditions that root themselves in deep symbolic belief and superstition. At the stroke of midnight may family and friends surround you and the New Year bring you happiness and health, and may no demons follow you into the coming year!