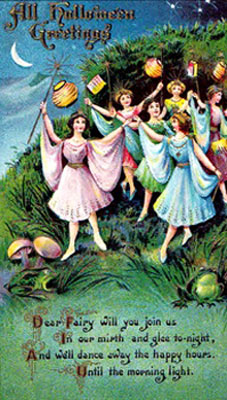 May Day; Celebration of the Faeries and the Witches-By Angelique Duncan

May Day; Celebration of the Faeries and the Witches

May 1st, associated with colorful flowers, Maypoles and the celebration of spring warmth and the pending arrival of summer. The origins of May Day go back far into history and have a presence in some form in most European and North American cultures having similar meanings attached to the day. However if one digs deep they find buried under all the flora and ribbons a history associated with the enchantment of fae folk, witches and Halloween.

Up until the 1950’s May Day was part of popular American culture with picnics, May pole dances and crowning of May Day Queens. In most European and Nordic countries some incarnation of May Day celebrations exist till this day. Many historians trace the holiday back to the Roman Empire and the Festival of Flora. The Gaelic cultures of Ireland and Scotland celebrated Beltane. The Welsh celebrate Calan Mai. In Germany and Sweden Walpurgis is celebrated.

The themes are common in each of these celebrations. An emphasis on flowers, fertility, protection and often include outdoor picnics, parades, May pole dances, crowning of May Queens and symbolic cleansing bon fires. Another common theme is the belief that other worldly entities are at their most prevalent at this time.

Ancient religions believed that there were certain times of the year, usually corresponding with the change of seasons and phases of the moon in which magical creatures could pass through a thin veil that separated their enchanted plane with the human physical plane. May Day or May first is one such occasion. It also is the antithesis holiday to Halloween, or what was once commonly known as Samhain.

Many early cultures believed that on the return of summer the faeries returned as well. They like their human counterparts had hibernated through the long dark winter months. When the warmth and flowers returned, so did the magical folk. It was believed that one of the most powerful crossovers for the magical creatures known as faeries, gnomes, pookas and other sprites was on the eve of May Day. They returned through the veil during the night to roam the earth in celebration.

Mythology tells that the spring celebrations of the faeries were not that dissimilar to that of the humans. Some cultures believed that, much like candy for trick or treaters at Halloween, that gifts of sweets, flowers and shiny things should be left at ones door in small baskets to appease the faerie revelers. If one did not leave gifts for the faeries, it was believed that they would reek havoc on ones crops, livestock and bring misfortune to ones home through out the summer season. During the Victorian era it was popular, especially among children and young girls to leave offerings of trinkets, cookies and cakes for “faerie picnics” or “faerie parties” to draw the faeries to their gardens and also guarantee the safety of ones flowers from faerie mischief.

Legend states after their night of merriment that magic folk would return to their prospective faerie mounds, woods and gardens until October 31st, the night of Samhain. This would mark the return of autumn, and the pending dark of winter. At which point the faeries would hold another night of celebration before passing back through the veil to their enchanted world to hibernate again until the return of the sun the following cycle.

It is not only the faerie folks that have had a place in May Day, but the day has a history with the Witches too. Many European countries believed that May Day was a night for witchcraft. Many, following the same theory of faerie legend that the veil between two worlds was lifted on the 1st of May, believed that witches would prevail on May Eve or Walpurgis night. There are many associations with May bon fires and witches through out Europe, Norwegian and former Soviet countries. It was believed that this was a time of Sabbath for the witches. Some cultures believed that the witches would hex or curse their crops and live stock and spread disease and misfortune to homes so bonfires would be burned to purify and scare away the witches or any passing evil spirits.

Others believed that witches would hold grand gatherings at significant geographical locations on Walpurgis Night. Some countries still carry on festivities to emulate and celebrate the meeting of the witches with costumed bon fires, extravagant costumed parades and merry celebrations. Other countries hold bon fires to burn straw or cloth effigies of witches to symbolically ward off evil from their lives and celebrate the arrival of summer.

In modern times most of what is celebrated is of a symbolic celebratory nature and less religious or meaningful ritual. However the symbols are mostly still in tact and the spirit of the celebration is the same. Given the folklore and widespread belief that a veil separating the human plane and the mystical lifts in the beginning of May, one might do well to leave a little something sweet or shiny in the garden, and maybe light a small fire in the ol’ Barbeque pit out side…just to be safe.