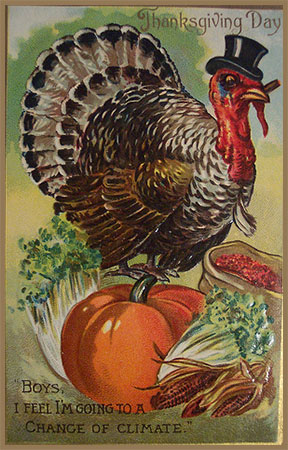 When one thinks of Thanksgiving images of the proud, plump turkey is immediately to follow. The nostalgic symbolism of this magnificent bird at Thanksgiving is so synonymous with the celebration that the holiday is often referenced as “Turkey Day”. How did the turkey become our national symbol of Thanksgiving? The bird has a rich and noble history worthy of acknowledgment as one enjoys their harvest feast.

The turkey was once revered by Mexican and South American tribes as a sacred bird and in some tribes like the Aztecs, Toltecs and Myans was appreciated as a God. The mythologies and symbolisms varied from tribe and region based on observations of the turkeys’ traits and behaviors.

In some Native North American cultures the turkey symbolized fertility, virility as well as pride. The male turkey will show it’s decorative plumes and strut in an elaborate mating dance to attract the female of the species. The dance of the turkey is seen as prideful and arrogant with grand confidence. This mannerism was often imitated by tribes before battle with the wearing of full turkey feather robes and headdresses.

The turkey was also known for being a bird of great wisdom and a messenger of warnings. The turkey has been said to have a sixth sense for awareness of its environment and can warn of danger and predators. They will fluff their plumes and take an aggressive stance if they feel threatened; well before the danger presents its self. The fowl will become intensely protective and never holds back in attack or when confronted with battle.

Turkeys will roost in trees and elevated spaces away from predators and to have a vantage point to oversee their territory. In the sleeping flock one turkey will be “appointed” look out to give warning of danger. Turkeys have very specific calls, gobbles and screams that have meaning for communication among the flock, creating a fairly sophisticated bird language of signals.

To many tribes the turkey was considered a rain spirit for their ability to predict the change in weather. When rain is eminent turkeys will puff their ornate plumes and fluff their feathers and give calls and dance. The rain dances of many North American tribes are an emulation of the turkey’s rain dance.

Tribes attributed the turkey with the symbolism of bounty, sacrifice and generosity. The turkey was given between tribes as a gift of bounty and goodwill. Being one of the hardest of the large fowl to successfully hunt and its ability to feed many when caught, the wild turkey was often the game of choice for ritual and celebratory meals of the Native Americans. Unlike the modern domestic turkeys raised for quantity of meat who are sluggish and cannot fly, wild turkeys can run at speeds up to 25 miles per hour and can fly short distances at 55miles per hour. Making them quite the challenge to catch for a predator or hunter. The turkey was present for harvest meals as a special bounty, well before the arrival of the pilgrims to American soil.

The turkey arrived at its namesake as a matter of mistaken identity from Spanish explorers who discovered the bird thinking they were returning to Europe with Guinea fowl from Turkey. Given the bird was acquired unknowingly from the wrong continent; it was named for its origin of discovery. And so the name was given to the North American fowl after a country the bird had never traveled from.

It is widely accepted that turkey was served at the first documented Thanksgiving meal, although there is no concrete evidence of this. It has been documented that beef and fowl were served at the first Thanksgiving feast, but no bird is specified. Turkeys are natural to the southeast and southwestern states and would not have been prevalent on the eastern seaboard at that time. Some historians say that the intent was to find and hunt a turkey, but the pilgrims were unsuccessful and stories tell that humble crows and fish were eaten instead. There is a historical letter that was written during the era of the pilgrims that mentions a turkey being served as part of a feast, however the document is not in reference to the legendary supper of Myles Standish fame that is romanticized in the Thanksgiving tradition.

Although turkey may have been served at some feasts, it has been accepted by modern historians, that the turkey did not become the traditional meal of the holiday until much later. Many Americans would serve goose, chicken or quail in lieu of the turkey as the centerpiece of the traditional meal. Turkeys may have become popular due to the aforementioned letter written by a pilgrim, Edward Winslow, which referenced a turkey hunt before a Thanksgiving meal. Some equate the popularity of Turkey at Thanksgiving from a proclamation by Alexander Hamilton that “no citizen of the United States should refrain from turkey on Thanksgiving day”. The turkey was a symbolic bird in the nations beginnings and was advocated by Benjamin Franklin to become the national emblem instead of the bald eagle. The historical quote follows:

“For my own part I wish the Bald Eagle had not been chosen the representative of our country. He is a bird of bad moral character. He does not get his living honestly. You may have seen him perched on some dead tree near the river, where, too lazy to fish for himself, he watches the labour of the fishing hawk; and when that diligent bird has at length taken a fish, and is bearing it to his nest for the support of his mate and young ones, the Bald Eagle pursues him and takes it from him.

With all this injustice, he is never in good case but like those among men who live by sharping & robbing he is generally poor and often very lousy. Besides he is a rank coward: The little King Bird not bigger than a Sparrow attacks him boldly and drives him out of the district. He is therefore by no means a proper emblem for the brave and honest Cincinnati of America who have driven all the King birds from our country…

I am on this account not displeased that the figure is not known as a Bald Eagle, but looks more like a Turkey. For the truth the Turkey is in comparison a much more respectable bird, and withal a true original native of America… He is besides, though a little vain & silly, a bird of courage, and would not hesitate to attack a grenadier of the British guards who should presume to invade his farm yard with a red coat on.”

How the turkey became the official sacrificial meat for the modern Thanksgiving meal is truly unknown. However it is now a mainstay of the holiday and one could not imagine Thanksgiving with out turkey. When celebrating all you are thankful for this year and counting your blessings, remember to give thanks to the turkey, a bird of noble and rich history worthy of its own American holiday. 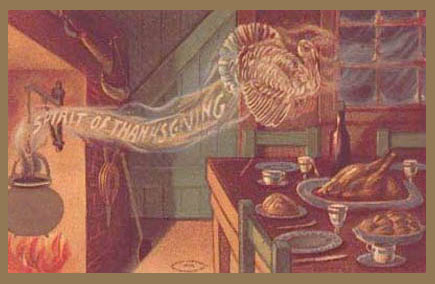