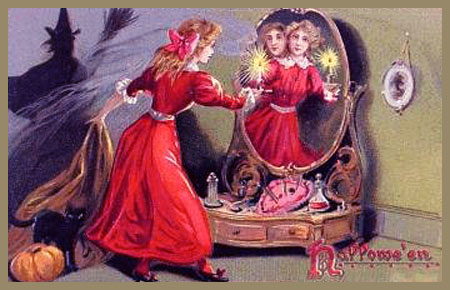 The Clairs. Consider Them a Little Lagniappe.-By Debbi Decker

The five senses. Smell, sight, touch, hearing, taste. Those are all we get. Or, do we? You walked down the hallway, and smelled roses. But you have no roses in the house and no roses in the yard. You were quietly reading a book, when you heard your name called, but you were alone in the house. Or doing dishes at the kitchen sink, when suddenly you felt arms around you and your family were all in another room. That face you saw in the mirror? It was the face of no one you know, and again, there was no around but you. You experienced a sudden craving for a food you have never tasted, much less heard of.

What is happening here?

Many paranormal experts believe strongly in what is called the sixth sense. It can manifest itself in many forms in connection with each of the five senses:

All fall under the category of Extra Sensory Perception or ESP. Scientists agree that it exists but fall short of explaining the how or why of it. Studies of the subject have been going on for hundreds of years. And there remains strong opinions both for and against the subject at hand.

Personally, I believe that we all have this sixth sense and that it was an important and working sense that was a part of humans from the beginning of existence, but one that was slowly, over time, damped down in the human race through factors relating to civilization, social structures, and religious beliefs. You could liken this to our appendix, which is a part of our anatomical structure that at one time is considered to have had a specific function, but which has lost that function through evolution. Children still, to this day, exhibit many of the traits of having ESP, that is until they go to school, attend mainstream religious functions on a regular basis, and become socialized into the present day civilization. Which, to me, only argues in favor of my beliefs.

Those of us who exhibit any of the above “Clairs” (as I like to refer to them) have either maintained that connection from birth or we have managed to reconnect to a part of us, which, like the appendix, still exists in all of us. Some of us feel it is a gift, while others consider it a part of their makeup that they would rather be without and therefore block these connections.

So, how does any of this fit in with the paranormal? Remember that the word “paranormal” simply means above normal or outside of normal. The term paranormal could be applied to many subject matters, but for this instance, I use the term in connection with ghostly activities, hauntings, etc.

Paranormal investigators like to investigate in darkness. The darkness renders some of our senses useless (sight), and dampens down some senses while causing other senses to become stronger. This in and of itself is not a paranormal thing. It is an activation of the human sensors in a different manner. As an example, when the lights go out, we cannot see anything. Our brain is trying desperately to “see” something, anything. If we close our eyes in the darkness, a signal is sent to our brain that the eyes are not working. After a few minutes, other senses are heightened. Hearing and sense of touch are two that may report to become stronger in darkness.

Referring back to the idea that we all have a sixth sense, there would naturally be those who exhibit a certain “Clair” that is stronger than others. I might be able to feel the ghostly presence more strongly, while you may be able to see that presence, and another may hear it.

Those who exhibit any of the “Clairs” are able to activate our human sensors differently, and use those senses in conjunction with the normal use of sense to feel, see, taste, smell, and touch the other side. A ghostly presence can use those senses to make their presence known without having to battle through the mental and physical blocks that our cultural heritages have placed upon us. Used in conjunction with paranormal investigating, these senses are an excellent and integral tool and should be used and accepted without prejudice.

Case in point. As a paranormal investigator, I cannot use my hearing as I am hearing impaired. However, my sense of sight and touch are greatly enhanced. On an investigation last year, while climbing a rickety set of stairs in total darkness with a fellow investigator, I “saw” and “felt” an architectural feature that my hand immediately reached for so I could steady myself. My hand met with a wall. I commented on it at the time as I was rather puzzled. Later that evening, we listened in on a discussion of the building itself and how it had changed over the years. That wall I touched was a recent addition. There was at one time an opening like a window with a deep sill. That was exactly what I saw and felt and that was exactly what I was reaching for. You can imagine the look I got from the other investigator with me on those stairs!

The next time you find yourself in a position of seeing, smelling, sensing, tasting, or hearing something that is out of the normal realm for you, try letting that experience play out. You are perhaps receiving a communication from the other side and the message might be of great importance. If you are investigating, don’t discount the smells or sudden tastes that might overwhelm you. There could be a reason that the entity on the other side is communicating in this manner. Perhaps the roses were their favorite flower. Or they liked that food you are tasting. Or even further, that food contained the poison they died from and they want to tell others what happened to them. It goes without saying that when investigating the paranormal, you have to accept the good with the bad, so to speak. Even if we are not aware of the Clairs, we all have them, and at any moment they could reasonably manifest themselves us and to others. Just equate it with having a little extra something special, or being given a little present or Lagniappe. After all, who doesn’t love receiving gifts? Even from the Clairs.