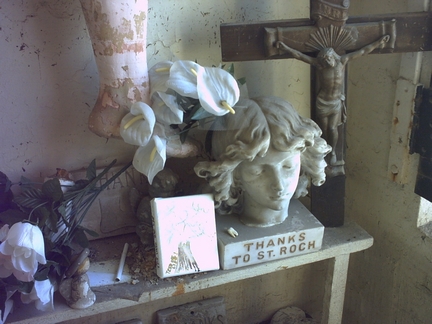 A Phantom Smell.
-By Debbi Decker

I am an empath. I won’t bore you with all of details and descriptions of what that entails. You can find all kinds of information on the internet. Being an empath, I am very familiar with the idea of Clairempathy (the ability to feel emotions, illnesses, etc. that are not visual). I am also very familiar with Clairvoyance (the ability to perceive in my mind’s eye the past, present, and future). My mind has a tendency to connect with people and basically be on the same page with them without ever having a conversation with them. I can walk into a room and immediately feel what has just occurred without even looking at anyone in the room. If I am around negative people or sick people for long periods of time, I begin to feel ill. I have moments of vivid thoughts that turn out to be predictions of coming events. While unnerving to many, it’s a normal way of life for me. I’ve written before about what I call the “Clairs”. Clairempathy and Clairvoyance are the two that frequently happen to me. The others not so much.

My first visit to New Orleans post-Katrina was for Halloween, in October of 2006. While a full year had passed since that catastrophic event, there was still a great deal of anguish present in the atmosphere, some of it human, and some of it… “other”. You could feel the stress of the residents and workers in the Quarter. Hotels were understaffed as were most restaurants, and the seafood industry was still in a flux. I spent a great deal of time taking pictures in the Quarter, and in the cemeteries just outside of the Quarter. Bus and cable car service to the Garden District or to the Canal Street cemeteries on the far outskirts of the City were still not in operation. The Quarter was safe. The rest of New Orleans was not. Case in point. My hotel was housing some of the private security teams that went out each day to the various Wards to stand guard and to prevent looting and other nefarious activities. Picture a hotel full of men garbed in black, carrying an array of weapons. Think Swat teams.

It was easy enough during the days to keep myself from being overwhelmed (Clairempathy) with the anguish and stress that the others around me were feeling. I have to do that on a daily basis anyway. Still, there was that subtle undertow of “other” that concerned me. Katrina had stirred something. And it was not a happy something. It had a darkness and sadness to it that I had never before experienced in New Orleans, though it is well known that the area is steeped in dark history, bloodshed, crimes, and natural disasters. Sunset during that visit brought an extreme sense of urgency. I had to get indoors. Whatever I was feeling was not good. The Quarter has always been a fairly safe place to roam and I have done so at all hours of the night (something I would never attempt in my own city!). And remember, this was Halloween – a time when the veils and doorways are open. Lots of things travel back and forth in the ether during Halloween. So, while I was able to block the sensations during the day, the nights left me feeling raw and over exposed.

Halloween morning brought me down to the hotel restaurant for breakfast. As I was reading the menu, I was suddenly overwhelmed by the smell of fire. It had a reminiscent tang of a campfire or the scent of wood burning in an open space and very strong. Glancing around I found no visible smoke, no smoking restaurant patrons, and no fireplace in the room or anything else that could be giving off that odor. My waiter must have noticed my consternation and confusion because he came over to ask me if I was all right. I asked him if he could smell smoke. He did not and after confirming that there were no fireplaces in the vicinity, nor was there ever a smokehouse or a fire in the building, I let it go. Because at that point, my waiter was looking concerned. I went on to order and eat my breakfast, enveloped in the phantom smell of fire the entire time. I took note of the fact that upon leaving there was no smell of smoke outside of the restaurant, nor did I smell smoke when I ventured outdoors. This was my first experience of Clairscent or the ability to perceive phantom scents or odors.

My plans for that day were to visit St. Roch Cemetery and I was particularly excited to be seeing the chapel dedicated to St. Roch. Since the cemetery is located a few blocks outside of the French Quarter, and in an area affected by Katrina, I felt it was best to take a cab to my destination. The neighborhood itself was not safe, but there would be other tourists around, so I was not concerned about being in the cemetery alone (are you ever REALLY alone in a cemetery?)

My cabbie dropped me at the entrance and gave me his phone number to call when I was ready to leave. He expressed some concern about me being by myself, assured me that there would be a caretaker on the grounds, and wanted to be sure I was able to get back to the Quarter safely. I spent several hours taking pictures and sat in the chapel for a while mourning the fact that the altar and statue of St. Roch had been damaged by the floods from the broken levies. To call this chapel interesting is somewhat of an understatement. The walls are covered in offerings and Milagros left by patrons who have experienced miraculous healings in the chapel (some very recent healings too). The floor is made of bricks, all of which say “thanks” in English and French. St. Roch’s head rested in the chapel side room among the relics and Milagros, and his headless torso stood guard outside the chapel door. 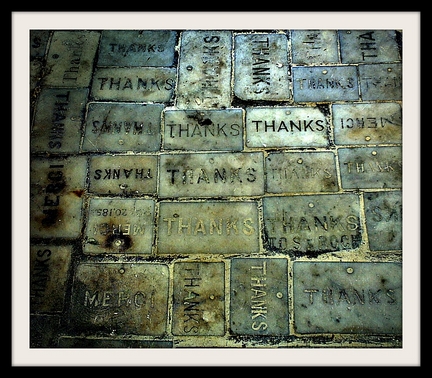 Right across the street from the cemetery entrance stood a shotgun cottage tattooed with that unforgettable graffiti of numbers and dashes representing the number of dead found on the scene after Katrina and the date of search. Water lines clearly indicated the depth of the flood waters it had endured. It was difficult to get a photograph of the cottage due to the traffic passing constantly in front of it, blocking the view and I gave up trying. In retrospect I wish I HAD taken a picture, good or bad. The cottage also made me uncomfortable, though I cannot explain why. I suppose you could put it down to the graffiti on the wall but that explanation has never resonated with me. After all, I had spent the last year grieving deeply for my City and had seen too many pictures and news stories for it to have just been my reaction to the general leftover aura of Katrina.

Dinner that evening was a hurried affair. I had hoped to watch the Halloween parade in the Quarter but it would not start until after sunset and my intuition was to get indoors. Something just did not feel right and I was not interested in figuring out why. I would leave that to the local Voodiennes to suss out. Entering my room after dinner, I turned on the television which just happened to be tuned to a local news station giving a live update. There, on the screen, was the shotgun cottage that I had just viewed only hours ago, engulfed in flames, and surrounded by firefighters pouring water on the structure. I was stunned. It clicked. The smell of smoke….

To this day, I believe that the phantom smoke I was smelling was a precursor to that event. I did check back frequently to see if there was an update at to the cause of the fire, but I never learned anything. After all, the City had a lot on its hands and a follow up on an abandoned cottage burning to the ground was probably low on its list of priorities. If there was a message, I do not understand what it was. If there was a lesson, I have yet to figure it out. It could have all been coincidence but again, there is no resonance. I cannot explain what happened but that phantom smell of smoke and the subsequent burning of that cottage haunts me to this day. Perhaps that was where the feeling of darkness emanated. The house was grieving deeply, ready to say goodbye, and it chose me to deliver its eulogy.