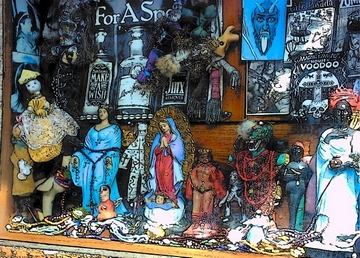 It was June 23, 1860, St. John’s Eve, and midsummer was upon them. They could hear the drums in the distance. A secret conversation, a statement and response, the meaning of which was known only to the anointed ones. People came to the Bayou St. John, whether by foot or by train to the end of the line. It was risky to attend, though people from all walks of life would at least attempt to come. Many who came to the dance would attend in anonymity, hoping to be ridden by the spirits. Some would be baptized in the water, all would share in the sanctity of the event. The smoke of the bonfires would obscure and maintain the secrecy. If the fog rolled in off the bayou, all the better. The dark of the night, the songs, the offerings, and the dancing were all for the benefit of the Loas. If the participants were lucky, their Queen, Marie Laveau, would attend and dance amongst them, perform the rituals, and preside over the feasts.

St. John’s Eve is a Christian celebration that roughly correlates with the summer solstice in the Northern Hemisphere. Celebrated on evening of June 23, it precedes the Saint’s day, which celebrates the birth of John the Baptist on June 24, a Catholic Holy Day. The roots of this celebration date back to the early pagan summer solstice traditions. Bonfires were lit to drive away the witches that pass by during the night, and sometimes effigies were burned. Young men and women would jump the fires holding hands. Music and feasting and divination were part of the festivities. Ashes from the fires would be placed in the corners of the fields where the crops were growing to ensure further growth and plenty. Magical herbs such as St. John’s Wort were gathered, though I have yet to discover what the name of that particular herb would have been in those times (since John the Baptist is a Catholic saint). The celebration of St. John’s Eve continues today. One has only to Google the holiday to see the various ways many countries did, and still do, observe the holiday.

The brief description in the first paragraph concerns the St. John’s Eve celebration the way it would have been observed by the slaves and free people of color who held Voodoo beliefs and lived in New Orleans and surrounding areas during the 1800s. The practice of the Voodoo religion was outlawed. Voodoo, an Afro-centric religion, has always been a somewhat malleable religion. The practices were as varied as the tribes whose members were uprooted and brought to New Orleans from the different regions of Africa, and later on, from Haiti. Because the religion itself was outlawed, believers used the Catholic saints, rituals, and observances as a “cover” for their religion. Many Saints had characteristics of the Loas (the deities and ancestors) they revered, so those Saints were borrowed to stand in for the Loas. Using Catholic practices, the believers could continue to honor their ancestors, beseech the Loas for their help, and continue to use their varied knowledge of the plants, animals, and elements in their day to day life. 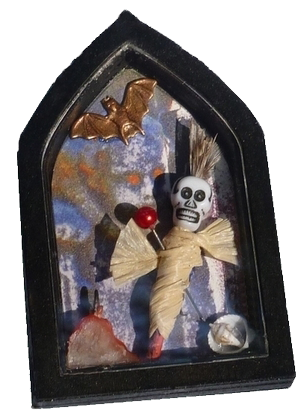 Voodoo in New Orleans is still practiced, and St. John’s Eve continues to be observed. Over time, Voodoo has lost much of its secrecy and has survived the horrors attributed to it by Hollywood’s depictions in the movies so many of us have watched. Baptism and head washing are two of the important elements of the observance. This ritual cleansing is to bring about renewal, good fortune, and prosperity to the person participating.

If you are interested in observing St. John’s Eve in your home, you can take a simple ritual bath using Florida water, white candles and white flowers. Play music that soothes you. Light the candles and pour of few drops of the Florida water (I can actually buy this in my local drugstore!) in your bathwater. You can either float the flowers in the water or you can set them around the bath. You may either pour the bathwater over you 7 times or you may rest in the water for a short period of time. Ask the deities to aid you in whatever path you wish to follow. Once you are done, dress all in white and go to bed for rest and rejuvenation, and hopefully, to receive the messages the ancestors have for you.

Another interesting use of water on this day is to create a protection bottle to drive away bill collectors, enemies, and the law. Assuming my readers need this. Go to a river or other body of water on St. John’s Eve and fill a small clean glass bottle with the water. I have read some versions of this spell that instructs the reader to recite the “Lord’s Prayer” while gathering the water. Personally, I don’t think that particular prayer is necessary; you could recite a prayer concerning protections that has a personal meaning to you. Seal the bottle and place it near your front door with the top of the bottle pointing towards the door. Ask the deities to aid you in keeping the undesirables away from you and your home. This bottle should never be emptied, though if contents evaporate over time you can refill it.

The bottle spell is an old spell, handed down through many generations of Voodoo practitioners. Notice the references to bill collectors, enemies, and the law. Think about how the slaves and free people of color would have lived in New Orleans during the 1800s. They were surrounded by those who would cause them harm, and the officers of law could at any time could arrest them for anything at all. Those who were free lived hand to mouth in many cases and were always on the lookout for the bill collectors that could take their money and livelihoods from them. Lastly, the recitation of the Lord’s Prayer, which is a Catholic prayer, is evidence of the use of the Catholic religion to pray to their Loas for protection and help.

So, what the heck does “danse Calinda” (the title of this article) mean? The original Calinda was a martial arts practice of stick fighting which came to the Caribbean islands in the 1700s out of the country of Kongo in Africa. Because stick fighting was not allowed by the planters of the islands, the movements were appropriated and adapted by the slaves into a type of dance. As many of the planters and their slaves came to New Orleans, the Calinda came with them, and the dance was a feature of many of the Voodoo gatherings. 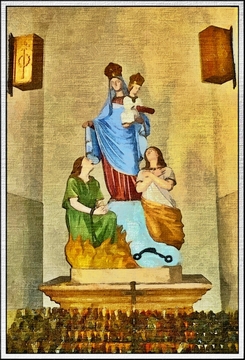 Photographs “Voodoo Window”, “Voodoo Shrine” and “Saint” provided by twistedpixelstudio and are copyrighted images. To contact Debbi Decker for purchase of these prints visit her website.