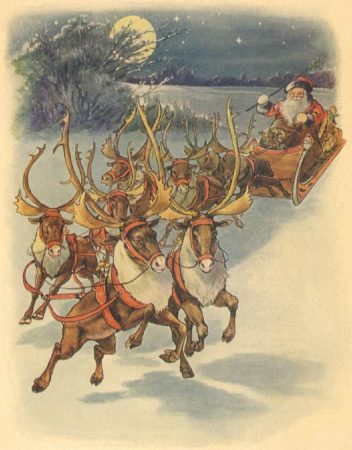 The Flying Reindeer
-By Angelique Duncan

Most folks know the eight flying reindeer that pull Santa Claus sled; Dasher, Dancer, Prancer and Vixen, Comet, Cupid, Dunder and Blixen. And everyone recalls that most famous reindeer of all, Rudolph. Some folks even know of Olive the other reindeer, but do we know where the magical reindeer at Christmas time come from?

Most historians cite the first usage of flying reindeer to pull Santa’s sleigh was in the 1823 poem; “A Visit from St. Nickolas” written by Clement C. Moore. However a more obscure reference to Santa’s sleigh being driven by reindeer appears in a publication dated 1821 in New York called the “Old Santaclaus with Much Delight” in which Santa has a single reindeer companion. The author and illustrator are not listed and not known.

The first reference to Rudolph and his glowing nose was in a free publication given to children as a marketing tool during the holidays by Montgomery Wards department store in 1939. A song recording based on that earlier marketing publication, written by Johnny Marks and recorded by Gene Autry in 1949 further gained Rudolph fame. Rudolph became immortalized when a television movie aired in 1964 loosely based on the 1939 publication, however with significant changes to the characters and storyline from the original tale. In 1999 Olive appeared in a made for television special that was inspired by a line in the Rudolph song. “All of the other reindeer” interpreted as “Olive, the other reindeer. In both productions of Rudoph and Olive the deer depicted are actually white tail deer and not reindeer.

Despite these accepted historical references as first appearances of Santa’s reindeer, the deer seem to have had a place in the Winter holiday season before being put into print in North America. They are present in early Norse, European and Celtic decorations and illustrations as winter icons traveling with Gods and elves, St Nicholas and other Yule and Christmas settings. Flying reindeer appear in documentation as significant to Pagan culture and winter beliefs well before department stores, radio and television broadcasts. These flying reindeer of antiquity may have been, on some level, the inspiration for the modern image of the flying reindeer we know today.

In Norse mythology Odin also known as Woden and also Jólnir was the deity who brought gifts during Yule celebrations. Woden was said to travel via a flying horse with eight legs whose name was Sleipnir. (Eight-legged horse perhaps correlates eight reindeer). It is also documented in Pagan beliefs that Woden was the leader of the Wild Hunt or Wild Ride that occurred during the Winter Solstice, the date of the Wild Hunt ranging from December 19th through December 21st. The Wild Hunt is often depicted as Gods, deities and ghosts that road flying horses and reindeer through the night sky.

Another Norse legend speaks of Thor riding a sleigh drawn by two flying horned goats. During the winter the goats would change into reindeer. The tradition of Thor at Yule was eventually morphed into the story of Junenisse who was a Yule goat who delivered gifts. This evolved into a elf who traveled with a goat and then just an elf who delivered gifts.

The stag and deer were associated with many Gods in different cultures and eras. In the Neo-Hittite era after the fall of the Bronze Age another God who was associated with flying deer and was the Stag God Karthuhas. The Hungarian Bards tell of a great stag who brings the sun to man by carrying it in his horns. In other Hungarian legends a female hind flies to the heavens and brings the moon, stars and sun to earth. In Celtic myth Cernunnos is the God of wild animals and fertility of nature. He is often depicted the same as the Green Man or the Lord of the Beast. Like Karthuhas, he was a horned stag man creature and like Woden, he flew through the sky on a sled with hellhounds and deer on an annual wild ride. Cernunnos also was said to turn into a Stag who would fly into the sky to capture the sun.

The Siberians refer to the “Heavenly Reindeer” who was a stag who is represented by the Bog Dipper constellation. He too flies to the sky, but instead of giving the sun, he steals it making the artic dark for a portion of the year. To return the sun a hunter must capture the stag. The appearance of female deer in late winter and early spring, known as Leukepius, will also return the sun.

In the Russia Far East tales were told of the creator bringing reindeer from the stars to give as a gift to the earth. The Sami people believed that reindeer created a bridge between this world and the spirit world and could travel between both at will. Ritualistic drums were made from Reindeer hides and beaten with a Reindeer bone to aid the shaman in traveling with the deer into the spirit world and as a tool to cast out evil. 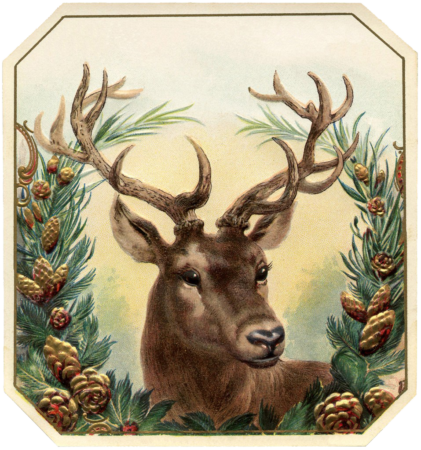 Another historical reference to reindeer at Yule comes from medieval times in a carol, now known as the “Holly and The Ivy”. It is not actually known when the original lyrics were written. There is some controversy and disagreement among historians over the origins of the song and it’s intent. It surfaced in popular culture as a traditional Christmas Carol during the Victorian era as a collection of traditional English folk songs that were reprinted and part of a performance. However the version put to print and adored by Victorians was evidently not the original version. Some historians believe that “The Holly and The Ivy” was originally a traditional Yule or Winter solstice song. The lyrics are about the battle between the Holly and Ivy battling for who would be king plant of the forest during winter. It is believed the song in its entirety was filled with Pagan symbolism of Yule. However was changed by the Church of England in it’s efforts to stamp out all things Pagan. Part of this effort was to alter written texts and songs and reassign Christian imagery to popular and enduring Pagan imagery and tradition. In an effort to boost the Winter Solstice as the date celebrating the birth of Christ in lieu of a Winter Celebration, many references and artifacts relating to Yule were altered. Thus today’s version of the song is an awkward combination of Winter Solstice references and the Nativity. The carol is significant to magical reindeer in that a line in the song references “running of the deer.” Thus reinforcing deer as an important staple to Pagan Winter imagery well before the Night Before Christmas became mainstream. Whether or not the running of the deer is reference to life in the forest at winter, the Wild Hunt or did something magical in the song, we will never know.

Reindeer are also known as caribou have been an important part of the artic circle for centuries. Indigenous tribes of European countries as well as tribes of the North American hemisphere were dependent on reindeer for their survival. They herded and lived with and upon the caribou as a source of food and pelts. To the Sami tribes of Europe they were revered and it was believed the deer were sent from the heavens to provide the tribes with life. The tradition of herding and celebrating the reindeer is still part of the Sami culture.

In Alaska, Canada and the northern most regions of North America, as in Europe, reindeer were essential to life of native tribes as well. Their symbolism in Totems and mythology as a magical creature of respect is deep seeded in tribal culture of Eskimo, Inuit and other native Alaskan peoples. However the reindeer of the Northern American regions are not faring as well as their European cousins. Exploration for oil, natural gas and mining are pushing them out of their natural territories and is taking a toll on populations of native peoples and the caribou that support them. In North America wild reindeer are no longer present in many sates where they once were prolific as population sprawl and global warming have made them all but extinct in what once their natural environment.

Perhaps magical flying reindeer are just part of the stories of Christmas imagination. Or maybe they are the flying companions of ancient Gods or maybe they are enchanted givers of life from the heavens. They are a part of Winter Holiday traditions in fiction and folklore with a rich mythology. Look intently to the skies this Winter Solstice and listen closely to hear the clasping of hooves on your rooftop on Christmas Eve, it might be the horned creatures of Winter the reindeer on their magical flight. 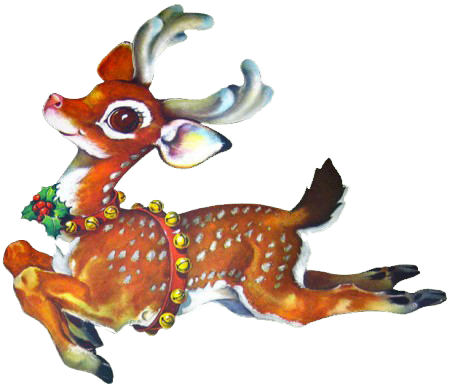