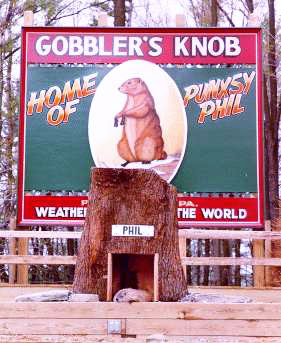 Everyone knows February brings Valentines Day and the month of romance and love. Most are familiar with stories of Cupid and his arrows, St Valentine and his notes to his beloved, and big heart shaped boxes filled with chocolates. February also brings that other holiday, Ground Hog Day.

For the most part the modern celebration of Ground Hog Day is acknowledged by quippy comments made by a meteorologist on some network morning show. Nearly lost to obscurity however is an interesting and varied history to the Ground Hog and his day.

Ground Hog Day is February 2nd. This date is also, according to the lunar calendar Midwinter, the half way point between Winter Solstice and Spring Equinox. The days begin to grow a bit longer and warmer, the sun becomes ever more prevalent. For ancient civilizations this was a time of hope. Hope that they would endure the second half of winter and reap the benefits of the coming spring. For agricultural folks the sun was crucial to livelihood and for their survival. Imbolc or Brighde day was a time to celebrate the breaking of the light of the sun from the darkness of winter. The seasons were ruled by the moon and the sun represented and relegated by their assigned deities.

One Celtic folklore tells the tale of Cailleach, the witch hag of winter, who reigned over the land from Samhain on October 31st until Bealtane on May 1st, but she became greedy and wanted her reign to last longer. She captured her antithesis Brighde, the sun maiden deity, who ruled the summer months. According to the folklore, the winter hag kidnapped the sun goddess and took her to her wintery cave threatening that she would not let her go as to make winter last longer than it’s normal course. If on February 2nd, the date of Imbolc. Cailleach decided to keep the sun maiden locked up she would make the skies clear and bright so that she could venture into the woods to gather supplies for the longer winter. If she had relinquished the idea of a delayed spring she would sleep in and the weather would remain the overcast of winter, thus allowing the Sun Goddess to return to bring the warmth of the sun at it’s due time.

Huntsmen and Farmers knowing of the winter witch and her greed for a longer reign of seasons would observe the reactions of burrowing animals at Midwinter. They knew the forest animals would be keen to the movements of Caileach. If the badger known as the “sacred bear” and wolverines emerged from their borrows, saw their own shadows cast from the sun created by the witch and exhibited fear then the witch was gathering supplies and had planned to prolong the cold season. However if the animals were behaving in their normal winter routines, they knew that the witch had abandoned her lofty plans and was sleeping in her cave. The sun goddess was safe, ensuring spring and the coming summer would arrive on schedule.

The Scottish carried the mythology of the winter witch as they migrated to Germany and other European regions. To keep the folklore alive they honored the brock or badger as the monitor of the witches weather related plans and the tradition became imbedded in German and Dutch cultures. However as times changed and Christianity spread over Europe the celebrations of the ancient Celtics and other nature religions were phased out for Christian interpretations of Imbolc and Brighde Day. The similar Christian rituals of Candlemass and St. Bridgid’s Day replaced these rites giving less emphasis on the lunar calendar cycles and weather with an emphasis on purification and the light of Christ. With the growth of Christianity came new calendar systems and the persecution of non-believers and pagans, the story began to change. The winter witch was no longer acceptable in practice and began to fade.

As migrations led Germans to North America the tradition was carried forth. With a lack of the familiar forest creatures of Europe, the Ground Hog replaced the “sacred bear” or brock as the chosen mammal to predict the onset or delay of the seasons. The winter witch has been all but completely lost from the American and Canadian traditions of what is now known as Ground Hog Day. The most commonly relayed story of why the Ground Hog predicts the weather is that allegedly dispute arose when the calendar changed from the lunar solar to the Julian calendar as to when spring would begin, either on February 2nd, Imbolc or March 21st known as Ostara. When ultimately the change was made to the Christian-Western Gregorian calendar the disputes over the arrival of spring were still unsettled. Some thought it best to let the badger decide, with no mention of Cailleach, just a badger and his shadow.

In modern history Ground Hog Day is more of a quaint tale about borrowing animals prognosticating the weather or the punch line of cynical and sometimes cruel humor. The most notable modern Ground Hog event is in Punxsutawney Pennsylvania started in the 1930’s. The event was initiated as a way of preserving German dialect and heritage. The Ground Hog became the symbol for the annual event. Although hundreds of tourist flock to see and take pictures of the famous Ground Hog named Phil to await his weather forecast, the celebration has less to do with the animal himself and more to do with speeches, beer drinking and entertainment.

So given the folklore of Imbolc, the Ground Hog and the Witch, when the famous Punxsutawney Phil is pulled from his nest at the famed Gobblers Knob in Pennsylvania and becomes startled, perhaps it isn’t from the cameras and lights, or even that he saw his shadow, maybe it is that he sensed the Winter Witch wandering the woods fetching supplies for her extended cold winter reign.