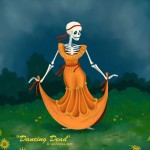 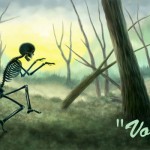 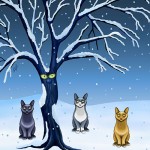 From her obscure beginnings as a doughnut peddler and obsessive doodler in northwestern Iowa, Annie moved to the big city in search of something called computer graphics.

She studied really hard and also squinted a lot while earning a Bachelors and a Masters Degree in Computer Science.

After years of toiling as a software engineer, the doodler that had been trapped between several lines of very complex computer code finally broke free and convinced Annie to become a painter instead.

Annie now spends her days painting colorful creatures and other oddities using a Wacom tablet and stylus. She also uses traditional art materials such as pencil, charcoal, pastels, and watercolor.

Although verified public sightings are rare, Annie is rumored to live with her husband and a clowder of cats and dogs in the suburbs of Phoenix Arizona.